Of-late you would have observed another new feature on Whatsapp, i.e. Blue Colored Double Tick Marks, which Whatsapp has been testing for last 2 days and now the feature is available with a lot of mobile phone users by default.

I observed it today and to my surprise, the app did not even update and this feature was unlocked, I believe this was already available in last version of WhatsApp but was not active.

While this ever growing mobile messaging app, already had “Double Tick” feature to confirm that the message has been received by the receiver, WhatsApp now made use of color to make it more useful and taking it’s app to next level where no one can compare it with SMS; which is already dead! 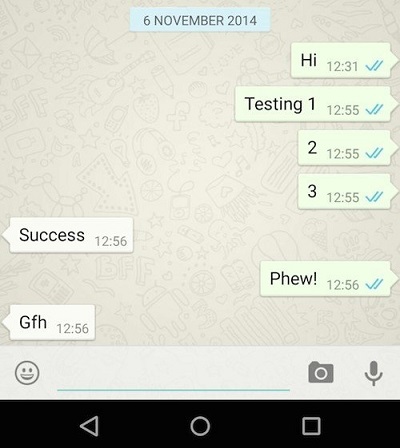 While checking its FQQ section, I discovered about this feature in detail, which says:

So, not to wait much longer, here we have very simple trick to disable this Blue Tick feature on Whatsapp:

When you receive Whatsapp Message notification in notification bar of your mobile phone, you get to know about the sender and the message snippet. After this you can disable your Mobile Internet Network or Wi-Fi Network and finally check your Whatsapp message. This will block Whatapp to send Message read status to the receiver. But when you will connect to internet again, the seen status will be sent to the sender. This one of the temporary workaround to hide away from this feature.

Another workaround for this is by installing third party Mobile Apps, which can disable the internet connectivity of Whatsapp Only. This can be security app, like antivirus program or app specifically made to block Whatsapp on your phone. It needs testing on your specific mobile phone device. On my Mi3, it has inbuilt security app to disable internet connectivity to certain mobile apps, which worked for me.

Hope this post will help you in hiding your seen status message and I will be updating this post with more working tools. In case, if you have better work around for this, do, let me know in comments below.